One of the most common way for targeting  big game fish offshore is by trolling baits and lures.

Our typical trolling spread here in Costa Rica typically consists of 2 to 4 of our favorite teasers (larger hookless lures) and 4 to 5 hook baits, Usually ballyhoo rigged on circle hooks.  This  basic spread is the norm in the area, and is proven to raise and catch all types of hungry gamefish - marlin, sailfish, tunas, dorado (mahi-Mahi), and wahoo.

If we are specifically targeting marlin, we often use larger teasers, baits and lures in the spread, or replacing baits with all lures and trolling at a slightly faster speed than normal to cover more ground and elicit a savage bite. Black Bart, Joe-Yee, Islander. Moldcraft, Moyes, and Marlin Magic are all popular and common brands of lures teasers we use here.

Teaser fishing is the true “sport” of sportfishing trolling. It is an exciting, addictive game and leads people to invest millions of dollars, to catch and release fish. It involves the use of hookless lures called teasers, to attract the fish into the spread behind the boat, and a technique known as “bait and switch”-to pull the teaser away from fish’s focus, and replace it with a hook bait or lure, giving the fish a new target, and the angler more control of the bite, improving hook set and hookup ratio. 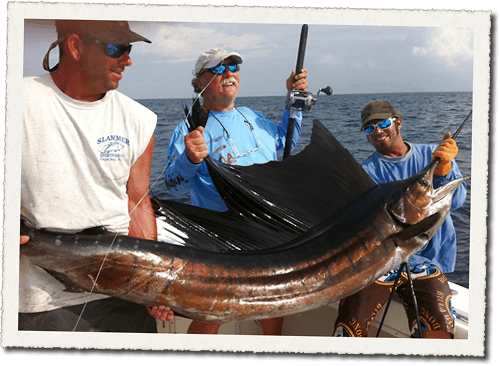 The teasers are pulled in the closest positions to the transom (rear of boat) allowing anglers to easily see the fish trying to eat the teaser/ bait. By allowing the fish to attack the teaser, whether it is out of hunger and curiosity, and not be initially stung by a hook in the first approach, it often provokes more aggressive bites out of the pursuing game fish, and provides spectacular show within feet of the transom.

We also commonly employ the use of Dredges, a type of teaser which runs beneath the surface of the water. It resembles a umbrella frame with six  to eight arms supporting several hookless baits- real bait fish or rubber ones, which looks like a school of baitfish swimming behind the boat. Dredges work extremely well at raising hungry billfish into the spread.