Fishing For Dorado In Costa Rica
(Mahi-Mahi or Dolphin [fish])

Dorado also known as Mahi-Mahi or dolphin (fish), are found in all the world’s oceans except for the artic. They are highly migratory traveling the oceans currents, Mahi often congregate under floating debris such as a floating logs, nets, seaweed, or trash. 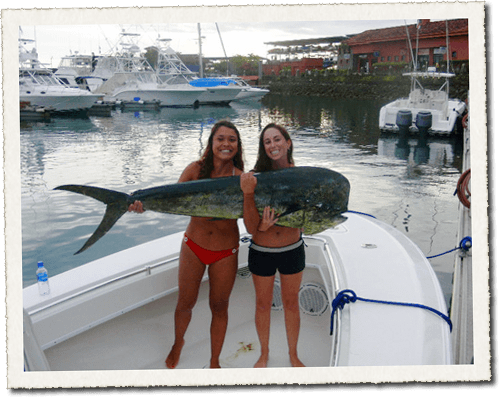 Mahi are colorful, quick, energetic fish that provide an acrobatic fight. They are prized worldwide, commercially and recreationally, for their tender flaky white meat, which is excellent no matter how you cook it.

They are one of the fastest growing fish and can grow up to 30 -40 lbs. in a year. Rapid growers, and can live about 5 to 7 years reaching up to 80 lbs. The world record is 84 pounds, but several larger potential world records are swimming around out there.

They are voracious eaters, which will eat anything that interests them and fits down their throat, even smaller dorados! I have personally caught them with baby turtles and plastic combs in their stomach.

Dorado often travel in schools, especially smaller ones; occasionally even thousands of them will be schooled up, traveling together. Larger ones are often in pairs or smaller packs, often with a bull male and a few females.

Dorado can be caught here year round, the green season, May-November being the best time to consistently find large numbers of them, as there is plenty of debris floating around during these months. We catch several large ones every year from 50 to over 70 lbs. There very easily could be a world record fish here, waiting to be caught.

We catch dorado with the same lures, baits, and trolling spreads as we use for billfish. Sometimes downsizing if we are specifically targeting dorado.