Costa rica is the home to several types of snapper. They are beautiful, often wary and cautious fish, and usually live around rocks, reefs, ledges, and other types of structure. All will eat crustateans,(crabs and shrimp), minnows, small fish squid and octopus. All snappers are prized table fare.

The cubera snapper is the king of all snappers, and a true trophy catch. It is a slow growing and long-lived fish. Living up to 60 years and growing to a record of over 100 pounds. I believe its long life cycle helps it be one of the more intelligent fish. It is a very cautious and wary species, often very sensitive to heavy leaders.

The name “cubera” is derived from a Spanish word for “viper”, referring to the several large canine teeth protruding from this species mouth. 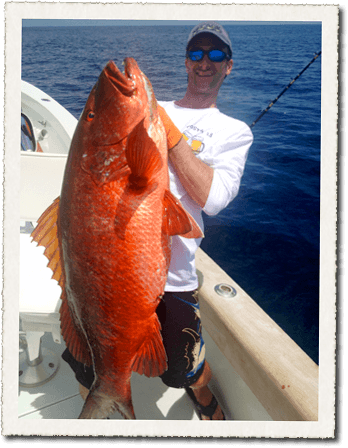 It makes it home in several depth ranges from the mangroves and shallows to excess of 200ft deep. I have personally seen large, 50-pound cuberas, hiding in caves that were water only 15 ft deep.

Cuberas prefer rocky structure and reefs, with lot of hole and ledges for them to shelter in. we most often catch them while live baiting around rocky points and reefs.  On deeper reefs, drifting a small dead tuna with the backbone removed can be very effective bait. They also live lobsters and crabs.

They can be very aggressive feeders at times, and sometimes can be caught casting poppers on the surface around rocky points. Catching a large cubera on a popper is a true achievement on the inshore fishing bucket list.  When hooked, they are strong fighters that usually run directly back to their nearest lair and around rocks and coral heads, which complicates catching them, as they brace themselves  in holes and around opposite sides of jagged rocks. Heavy drag is a must to stop them before they break you off.

Mullet snapper are a long slender snapper that often hang on large schools and  sometimes can be seen boiling on bait on the surface. They will often readily attack baits and poppers cast in their vicinity. They are strong energetic fighters. 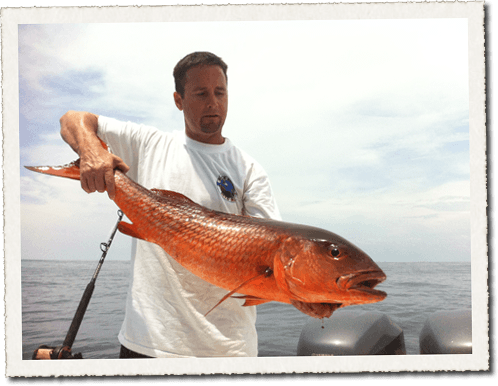 Food quality is good, but all the bloodline (red portion of filets) must be removed leaving only the white flesh. The bloodline has a very pungent flavor which is extra strong in this species.

May refer to a few different species of snappers, Colorado snappers, Silky snappers, even big Spotted Rosy snappers, may fall under this category. Most average 5-20 lbs;  all are prize fish and excellent eating.

The yellow snapper is a close relative of the atlantic schoolmaster snapper. It lives close to rocks and ledges, it is usually reddish brown on the front fading to bright yellow on the rear fins. Most are under 10lbs.  Excellent food quality.

Rock snappers are an unsual snapper, with several distinictve charateristics. They are olive green, as opposed to the reddish coloration of most other snappers - with alternating dark and light vertical bands. They also have two “feelers” antennea like structures protruding from their upper jaw. 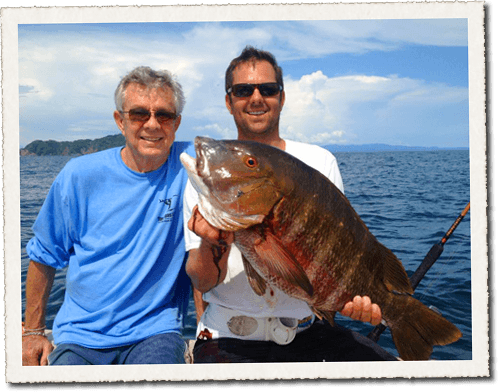 They hang around the bottom and rocky structure with lots of holes to hide and shelter in, and usally run to their hole as soon as they feel the hook. If you can get them out of the structure, they are fairly weak fighters that give up easy, but are excellent eating. Usually 3-15 lbs.

The spotted rosy is one of the smallest species of snapper found here in Costa Rica, they are very similar to the lane snappers cuaght in the Atlantic Ocean. It grows to a maximum of 4 or 5 pounds. With most being 1 pound or less. They reach sexual maturity at 6 inches. So keeping an 8-12” lane is perfectly fair game. 1 10”  Rosy snapper is absolutely a delicious meal fried whole. In fact, most of the time if you order a whole fried snapper in a restaurant here, often it is labeled as “Pargo Rojo” on the menu, but it is actually a lane or spotted rosy (if you are lucky).

We often catch several of these while bait fishing for blue runners, and are always a welcome catch. They can be caught from the shallow to about 200 ft. but often congregate in large schools between 50-150 ft. around rocky bottom areas. When schooled up they can are aggressive feeders and it can be very easy to catch 10 or 20 in a short time, throwing back the small ones and keeping a few larger ones is always a bonus for dinner.

They as all snappers eat minnows, squid, and crustaceans- shrimp crabs and lobster.