Roosterfish are the prize inshore game fish on the pacific side of Costa Rica. They are easily recognized as a brilliant silver fish with iridescent black stripes sweeping down and back from a very distinctive fan like dorsal with 7 long streaming rays. 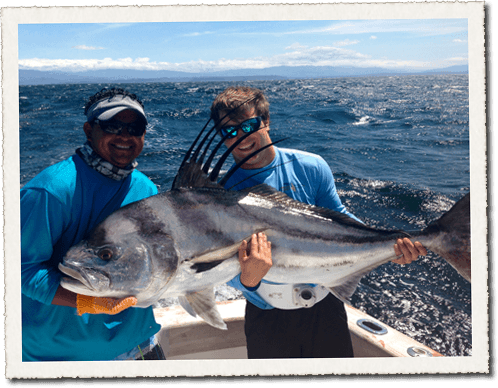 Depending on where you are fishing, roosterfish average from 20 to 50lbs and are common up to 80lbs., and ocasionally bigger. The world record is 114, and it is believed there are potential world record roosters waiting to be caught here.

Roosterfish inhabit rocky points, ledges, and pinnacles near shore and often found around beaches and river mouths with lots of bait. They are ambush preadators and can often be found in current rips alongside structure.

Roosterfish readily eat bonito, blue runners, goggle eyes, mullet, herring and sardines, and will attack trolled rapalas and top water poppers. They are an extremely strong and tough fighter. So be ready, this is a fish that does not like to surrender!  Small and mid sized roosters (up to 30lbs) occasionally jump when hooked. 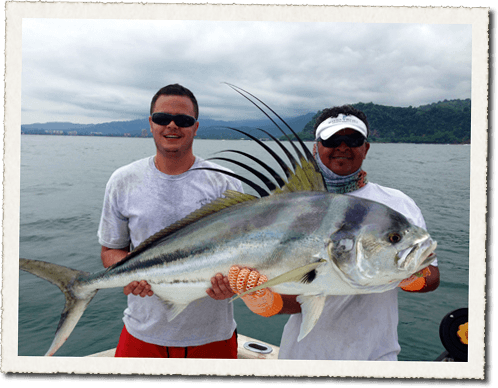 They often begin to fight the hardest when you think you have them beat and almost to the boat. They will run hard and deep, over and over, shaking their head in attempt to dislodge the hook. Its not uncommon to fight a large rooster for 30-45 minutes or longer.

Roosterfish are in the jack family with crevelles, horse eyes and amber jack, and not considered to be good eating. They are on a catch and release basis only.