Blue, Black, and Striped Marlin are considered to be the pinnacle of offshore gamefish - and you can battle all 3 right here off the coast of Costa Rica. Marlin's stellar reputation is due to their fighting spirit, strength, rarity, ability to grow to large sizes, and spectacular show they provide when hooked. They are all beautiful fish who often rise into the spread with pectorial fins lit up electric blue. When fishing for marlin, we troll or live bait for them depending on conditions. Any time you get a bite out of a marlin it is excting, any day you have the opportunity to catch one is a great day.

Of all marlin species, the blue marlin is believed to grow the largest. The world record is Pacific 1376 lbs. and Atlantic 1402 lbs. There have been unofficial world record blue marlin caught exceed 2000 lbs., but in these waters most are between 200-500 lbs., and occasionally larger. 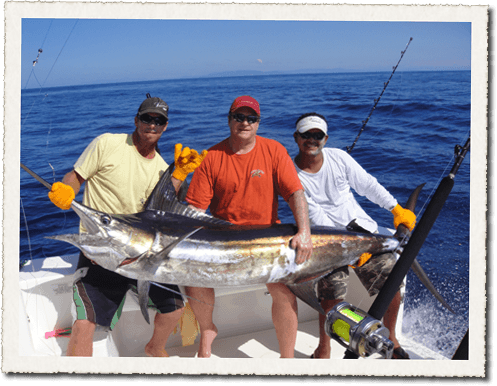 Found in all the world’s tropical and warm temperate oceans, they are an apex predator at the top of the food chain. They eat almost anything that swims, including squid, flying fish, tunas, dorado, jacks and even smaller marlin.

They usually are found in water over 500 ft. deep, along dropoffs, pinnacles and current edges hunting for their next meal.

When hooked, blue marlin display explosive power, frantically jumping and running at high speed in attempt to dislodge the hook. Diving deep and pulling hard in between jumps. They are an impressive gamefish with almost inexhaustable energy, making marlin fishing some of the most challenging and exciting you will find in Costa Rica.

Black marlin are found in the Pacific and Indian oceans. At a quick glance, they appear very similar to the blue marlin given their smilar shape, size and coloration, but their dorsal is porportionaly the smallest of all billfish and their pectorial fins a in a fixed down angled position, they cannot fold up along the fishes side as a blue marlin. This is the best way to be sure the fish you have is a black. Proportionally, they have shorter thicker bills, and many appear to have bigger heads than body size, compared to a blue.

They can be caught offshore in the same deep waters as blues, but unlike the blue, they can also  often be found in shallow inshore reefs, and on a rare occasion, they may even be hooked near rocks along shore.

When hooked black marlin often fight hard and deep, and save most of their jumping until they are close to the boat, providing a spectacular show. They are often considered one of the most photogenic fish, because of their tendecy to save most of their jumps until they are just feet away from the boat. Many of the best fishermen in the world consider black marlin the toughest fighting of all fishes.

Striped marlin are the smallest species of marlin in the Pacific Ocean.  The world record is 494 lbs., most caught in these waters around Costa Rica are 80-200 lbs., sometimes a little bigger, often confusing them with small blues. The distingishing feature is a much taller dorsal fin realtive to body size, with a roughly curved tip rather than a sharp point. 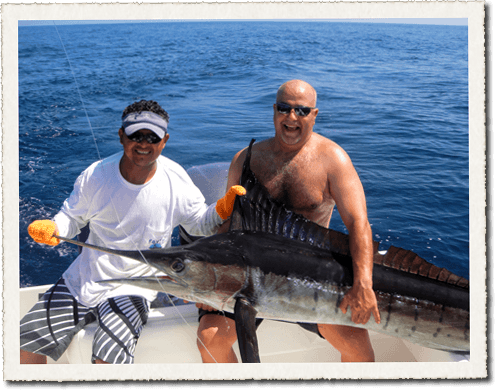 They often travel in packs much like sailfish. It is common to raise doubles, and sometimes even triples and quads.

They can be finicky eaters, quickly switching from teares to teaser, checking everything  in the spread behind the boat, testing the angler’s agility in the cockpit. Their smaller stature does not mean they lack spirit , when hooked they can be very acrobatic, and have all the endurance and stamina that marlin are known for - diving deep and pulling hard in between jumps.