Sailfish are the staple of offshore fishing in Costa Rica and you will see plenty of them during a charter fishing trip with us. Costa Rica can be one of the best places in the world to land big Pacific sailfish in high numbers and is known to produce some of the largest. Average sailfish here are about 100lbs, it is common to catch them much larger, and approaching 200lbs and over 10ft long. The world record is 221 lbs. they are an extremely fast fish, and have been clocked at over 60 mph. 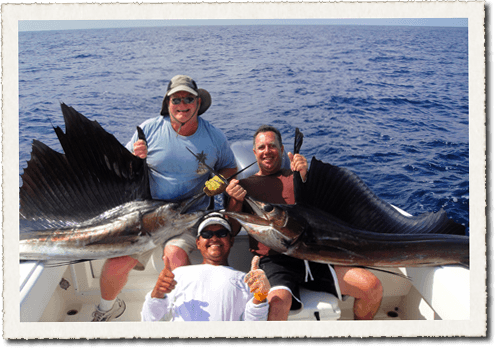 They are easily recognized by their long slender body, long bill and large dorsal Fin resembling a sail, relatively much larger than that of any marlin species. Sailfish may appear many different colors from brown to blue to gray, and have the capability to change color and patterns.  When excited they “light up”, and become brilliant iridescent blue and purple with a silver belly. It is thought that there ability to change colors serves as a form of communication with other sailfish.

While fishing for sailfish offshore in Costa Rica, you will often see them “free jumping” or “flopping” jumping out of the water often trying to remove parasites from their skin or gills, or trying to herd baitfish into a tight ball. Other times you may see them “tailing”- slowly cruising on the ocean’s surface with their tail fin and sometimes dorsal fin sticking out of the water.

They feed on small fish, sardines, ballyhoo, and squid. Sailfish often travel in schools or packs and work together feeding. Here in Costa Rica, sailfish are primarily caught trolling a spread of teasers and dead bait on circle hooks.  It is very common to have multiple hookups at once, know as “doubles”,” Triples”, and “Quads”. They also can be caught live baiting around reefs or floating debris. I have occasionally even caught sailfish while fishing for roosterfish along the rocks. 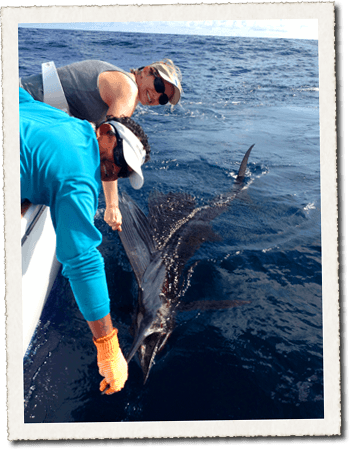 Sailfish are found in these waters year round, but the main season begins in December and runs to April/ May. The absolute peak season being February to April. It is quite normal to raise and get bites from 10 to 30 sailfish in a day during season. There are many times where good boats are getting over 50 bites a day, and on occasion over 100.

In green season, May- Nov., there are still plenty of sailfish around. It is common to catch 2 to 8 a day in off season.

When hooked, sailfish fight vigorously and are highly acrobatic; tail walking, jumping and flipping repeatedly in attempt to dislodge the hook.  They are a spectacular sight and great fun to catch.

Sailfish and marlin are catch and release only.