As of the beginning of November, we are just getting started with the first busy influx of guest for season, after taking most of October off for our annual maintenance projects and getting the boats ready for season.

The weather has been improving over past few weeks with less rain and more and more sun. It has been pretty nice with a little cloud cover keeping the temps relatively cool and pleasant. We've had to deal with some green water earlier in the month, causing us to run a little further to find fish, but that seems to be clearing up. Over the past week the fishing has moved in much closer.

Offshore the meat fishing has been a real highlight so far this season, especially with the influx of large numbers of dorado AKA mahi-mahi or dolphin.

October thru December is usually peak season for dorados here, but this is the best season we've seen in 3 or 4 years, with lots of good sized "gaffer" dorado showing up everywhere and hungry to eat our baits.

Boats have been catching them anywhere from inshore current lines just a few miles out, to as far as you may venture offshore. Landing a few every day, and some days there may be areas around floating debris that you can catch as many as you want filling the box with 10 to 15 or more. Several days we actually had to stop catching them and go try to do something else while trying to avoid catching any more, but still catch a few more. I have to say that all our guests are happy walking off the dock with bags of fresh mahi for dinner. 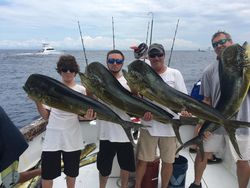 Expect the dorado numbers to begin to decline sometime in December, before they fade out in January or February.

Yellowfin tunas have also been very common catches, maybe not every day, but several days a week there have been pods of spinner dolphins (a type of porpoise) with plentiful tunas traveling alongside them. Most tunas have been in the 20-40 pound range but a few bigger ones have also been caught. 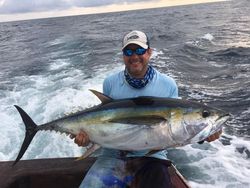 Expect the yellowfin tunas to remain in good numbers year round as they have been for past couple years. Last year, we were getting some nice 80-150 pound tunas in January and February, mostly on live bait such as blue runners, bonitos, or skipjacks. We have also added a helium balloon kite setup to the EPIC, which has been working well to use rubber flying fish off the kite to fool larger sized yellowfin when live bait is not available.

Billfish, sailfish and marlins we pretty scarce in early November, with just an occasional marlin getting caught and sails were pretty rare. But over the past week, the numbers have started improving as they should. We are now seeing a few sails almost daily offshore and marlin seem to be getting more common as well.

Expect the sailfish numbers to really begin ramping up in late December and January. And January - April will have consistent good numbers of sailfish.

We usually have a good influx of blue and striped marlin offshore here sometime in late November and early December. It just has not started yet. Last year, we had a few days of a hot marlin bite in late November, and it really turned on early in December and continued all the way to early February - we had marlin shots pretty much daily and some days multiple marlin shots.

One of the best days on EPIC last season was Dec. 28 when we landed a triple grand slam with 3 blues, 3 stripes, 3 sails and a bonus 50# wahoo and a couple triple tails. But we also landed a few other grand slams in December and April. Hopefully we can beat that this year.

Inshore has been good as well this month with a variety of species to catch. We've had a couple groups of return clients with us multiple days, and wanted to do more than troll, so we spent several days fly fishing, jigging, casting poppers and lures and bottom fishing with sardines. Landing an assortment of species, rock snappers, yellow snappers, blue trevally, rooster fish, almaco jacks, grouper, jack crevalles, mackeral, and a few others I'm forgetting. 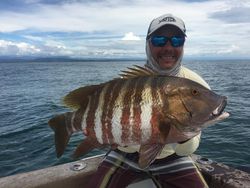 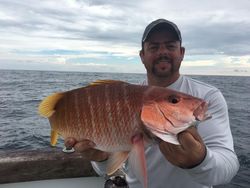 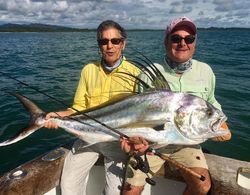 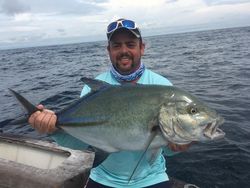 Expect the inshore to remain good overall through the next several months, with an assortment of species to catch, even the prized black marlin should be an option around shallow inshore reefs for those that have the patience to give it a try. 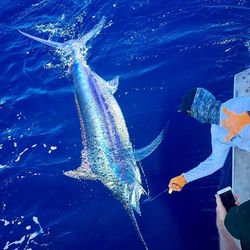 Be sure to check our social media pages for more up to date trip reports:
Facebook: http://www.facebook.com/EPICCR/
Instagram: http://www.instagram.com/epicfishingcostarica/

Until next time, Tight lines!