October is usually the slowest month of the year here. Historically the rainiest, tends to be the slowest for tourism here, weather can be sport with some days of heavy rain if a tropical wave passes through. We schedule a couple weeks at boat yard, for out of water maintenance of running gear, bottom paint and a whole list of repairs and upgrades we don't get the chance to do over out high season.

We do usually fish a handful of days and the fishing is typically very good, even better the rainier the month has been.

Heavy rains flush lots of wood and debris out of the rivers. Lots of floating debris brings in the mahi-mahi (dorado) and makes them easy to target. And not far outside them you will find abundant blue marlin and occasion striped marlin showing up.

Logs or trash holding lots of bonitos and small yellowfin tuna will often have lots of larger predators like mahi-mahi and marlin nearby waiting for an opportunistic meal.

There are so many mahi around, after we catch 10 or 12, we have to quit pulling ballyhoo baits and just pull marlin lures and teasers to avoid catching so many mahi-mahi all day.
If you have natural baits out you will have to stop every 4 or 5 minutes to reel in mahi. If you keep stopping it eats up all your (marlin) fishing time and kills your chances of driving over a marlin.

We only fished a few days this October, and spent a couple weeks in the yard repainting cockpit, and deck, bottom painted the hull and installed a fighting chair among other things.
The days that we did fish were awesome. Plenty of mahi and saw multiple marlins each day. But lots of logs and debris to watch out for, and a some rainy days to deal with.

As November rolled around, the dry season weather began and we started fishing almost daily.

It kicked off with a bang; our first trip of the new season, Nov. 1st, we saw 9 marlin and released 3 for 6 blue marlin, 3 for 3 striped marlin and 1 sailfish (along with keeping a boatload of mahi) making a grand slam to start out season. And was a very good indicator of what was to come. The next 6 weeks would be some of the best marlin fishing we have had in a while. 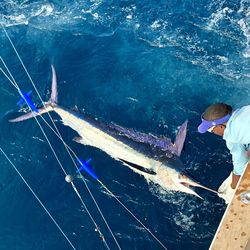 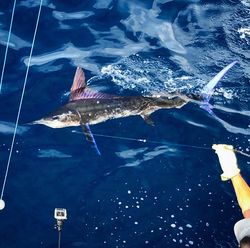 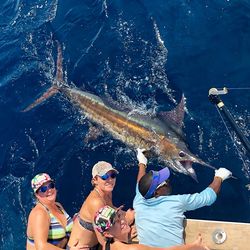 The entire month of November provided us with multiple marlin shots daily. Seeing 2 to 5 marlins a day has been the norm. Mostly blues but a few stripes here and there.

Not many sailfish around - most days we didn't even see one, but some days you might see 3 or 4, but no complaints because we would rather hook up to marlin anyway. 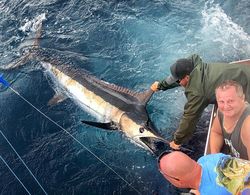 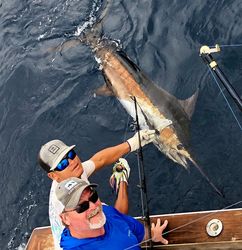 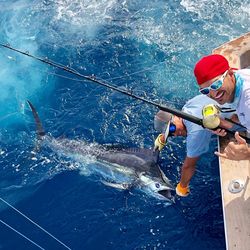 The mahi-mahi (dorado) were as thick as possible the first 2 weeks of November. We didn't even bother to put ballyhoo in the rigger because we would stop too much, we just pulled 2 teaser and 2 lures and still caught too many dorado just trolling around in open water.

They thinned out a little over the month, but any days that there was any substantial floating structure, like a big tree or a commercial FAD platform there were literally thousands of mahi around it. We pretty much kept to the teasers and lures spread all month to limit the mahi catching. 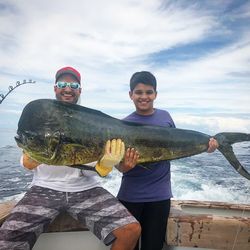 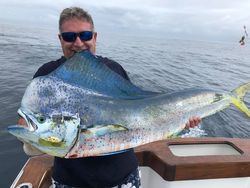 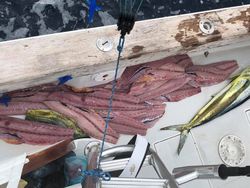 There were yellowfin tunas but we and the rest of the fleet focused very little on pursuing them this month, with so many mahi around the coolers were full before noon daily. The days we tried we had no problem catching them on live bait, the readily inhaled blue runners. Lots of fishing int he 40-60 pound range. 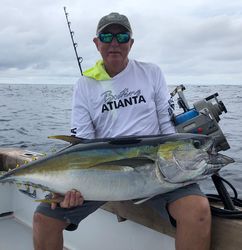 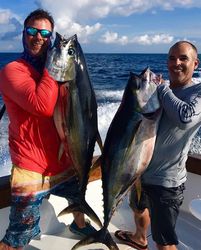 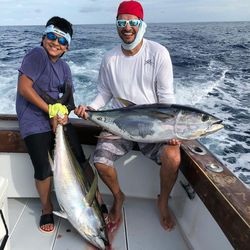 Inshore we only spent a few days inshore this month. We had very good success targeting trophy roosters at Isla Negritos. The days we stayed on the Los Suenos side of the gulf we caught a variety of species, wahoo, golden trevally and groupers. 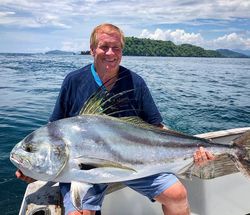 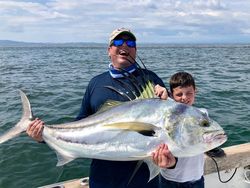 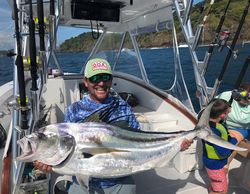 Marlin - Expect marlins to be common for at least a few more weeks into December. And fade off from there to be more occasional catches January February, with some days where an unexpected bite may turn on. Over the past couple years our marlin bite really started mid-December and lasted through January. But with this early start, I don't know if they will hang in big numbers though Janaury this year, the only way to know is to get out there and fish. Even if they are not every day, they can show up any day; so be ready and keep a positive mindset. 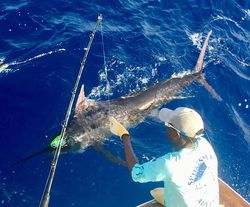 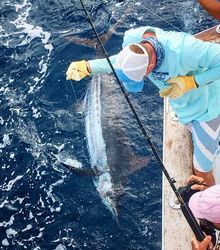 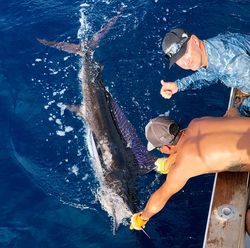 Sailfish - January-March is our primary sailfish season. Though we do get some good fishing for them on and off in the green season like June and July. But the usual migration of big numbers typically starts in December and lasts for a few months through spring, which also coincides with out tourist high season and perfect dry season weather. 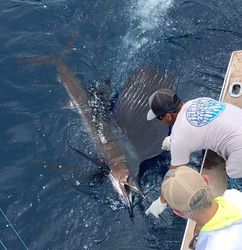 Mahi - last year was the best year we had for mahi in several years. They were common all though high season and green season. A very solid showing all year, whereas for a few years before that we only saw them in October through December and they faded off quickly after that. But the massive numbers this November looks promising for another strong year. 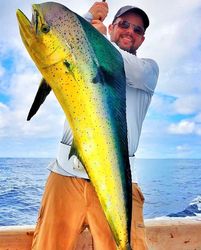 Yellowfin tunas - We have had very steady and consistent year round yellowfin tuna fishing for past few years. I expect it to continue. There will be some days and maybe a week here and there where nobody find them. But they are almost always a pod or 2 somewhere out there with a 40 or 50 mile radius form the marina Los Suenos. 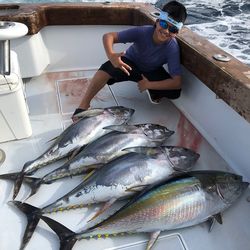 Inshore - Inshore fishing should really pick up over next couple months. January through March provided some great opportunities for roosterfish, cubera snappers, grouper and jacks.

Sardines become common around river mouths on the beach.

Small roosters fish will be common and plentiful right out past the breakers on Hermosa and Esterillios Beach. We often catch a lot of them on light tackle slow trolling sardines.

Larger roosters are found in a little deeper water 30-90 ft. of rocky points and high spots off the shore, caught using blue runners, moonfish or bonitos. Also cubera snappers can be randomly caught in any habitat you find roosters.

We have some great days targeting big roosters around Isla Negritos year round if the time is right. But definitely some of our best days are in January through March. Using 2-5 pound bonitos is the best bait to target big roosters 50 pounds and above. It is their favorite food, but can be a tricky game as the hookup ratio using such large baits can be hit or miss, you really need to baby them and not be aggressive on the rod or you will pull the hook. 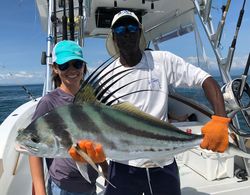 The outer reef, known as the "26 reef" really should come alive over next few months. It is best spot to target cubera snappers, mullet snappers, jacks and much more. You never know what you can catch there, sailfish, blue marlin, black marlin, mahi, broomtail grouper and even mero (goliath grouper) all make appearances there from time to time.

I wish you all tight lines until next time!