It has been a weird November, with unusual weather here on the central pacific of CR, after a fairly dry rainy season (may-October) it usually starts to quit raining here in November. But not this year, we had lots of unusually amounts of rain and some pretty windy days throughout November. No lighting or electrical storms, but lots of drizzle and low foggy cloudy with some hot, sunny days in between.

We even had Hurricane Otto, the first hurricane to hit Costa Rica in something like 138 years, make landfall on the northern Caribbean side around the Costa/ Nicaraguan border. Even though it did do a lot of damage to some small towns up north with flooding and winds, oddly enough, we had sunny skies calm seas and almost no wind around Jaco/Los Suenos the days it was passing through the country up north.

Now as we are getting into early December, the winds seem to have dissipated and the past few days have been consistent sunny and calm seas, beautiful days this area is famous for though the winter months. From now through April it should be almost zero rain, clouds or wind, just lots of sun and calm seas to enjoy fishing and escape the cold fronts of the USA.

The fishing though November was up and down. We had lots of dirty green water throughout the month causing us to have to really search for fish.

Our sailfish numbers have been pretty low, they are beginning to show up as they begin to migrate into the area sometime in November and December, but there have not been large numbers of them yet. Just 1-5 bites a day has been the norm throughout the past month. These numbers will rise through December and by January 15-30 bites a day should be the norm, sailfish numbers really peak late February through early April where 30-50 bites a day, or more is the norm.

We usually have a good run of Marlin around here in November, sometimes it goes for a couple months sometimes just for a few weeks. This year, it started slow in early November, but exploded for a few days mid-November, where every boat was getting 1-6 shots a day of blue and striped marlin, and then dropped off, where just a handful of blues and striped marlin would get caught by the fleet on any given day for the rest of the month.

There are still a few around and it is common to see a marlin or two per day, just not every boat is seeing them every day right now. There should continue to be marlin around offshore throughout the next several months.

Black marlin - I did catch one inshore fishing the reef early November, but they seem to be best target inshore between March and August.

It has been excellent blue marlin fishing further offshore at the FAD's located 80-200 miles offshore for those willing to go for mutli-day overnight trips.

For mahi-mahi/dorado, November is usually peak month for these fun gamefish, but last year 2015 was a very dismal showing after a fantastic showing in November 2014, 2013 & 2012.

So far, this year has not been great for them, but they are some around offshore. Almost every boat gets 1-5 bites a day for past couple weeks, mostly 15-30lb fish, and clients are stoked to be able to keep some for dinner. They should continue to hang around for another month or so before the numbers begin to decline late January.

Yellowfin tunas have been consistent. We have had a great year for them. Over the past year, it was the first time in several years that we have consistently had yellowfin tunas around through the winter months, on an almost daily basis. We have even been finding 15-20 pound yellowfin tunas very close inshore within a mile or so of land this month in numbers I have never seen before. Even kayakers have been catching a few. They really save the day if you can find them. And they have been out there almost every day with just a few dry spells in between. 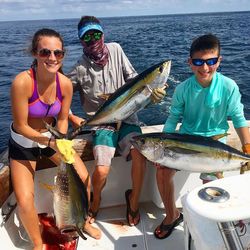 It's usually very easy to catch several small ones 10-30 lbs. on small lures like cedar plugs or the "bullet" ; or bigger tunas (40-150 lbs.) are easier to catch if you have live bait, like blue runner or the their favorite a small 2 to 4 lb. skipjack.

Tunas are super strong and tough fighters, pound for pound the toughest fish you can fight around here, a 40 pound yellowfin tuna is a much stronger fight than a 100 pound sailfish, as they tend to stay deep and avoid the boat, whereas sailfish come up jumping and stay near the surface and you can quickly chase them down with the boat and make up line.

Inshore there has been a few rooster fish, cubera snappers and amberjacks getting caught around shallow reefs and rocks, this should get better through the next few months. January - April is usually very good at some of the inshore reefs and rocks in 60-200 ft. 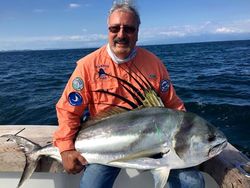 The deep dropping has been OK for small groupers and snappers out in 300-500 ft. if you want some great white meat to eat.

Overall I would say the fishing was off for November here, as we move forward through December, expect to weather to improve with any rain and wind dropping off to nothing for the next several months. The clear blue water will move in closer as the rain stops pushing dirty water out to sea. The sailfish numbers will definitely be improving to provide plenty of action offshore all day long through April, with a few marlin mixed in, and hopefully a steady showing of tunas will continue to provide fresh sushi.

Our inshore will pick up for rooster fish and Cubera snappers on the shallow reefs.

Looking forward to bending lots of Rods this winter,