even though we are in june which is traditionally our "low Season " here in Los Suenos, Costa Rica
we have been having some great fishing over the past few weeks.

Sailfish have been unusually abundant for this time of year. there usual peak season is jan - april which was a little off this year, but over past few weeks we have been getting 8-15 bites a day consisently, about 16-20 miles out along the drop-off at the tip of the bank which sticks out there,which we call the "corner".
more bites are easily possible some days, if you just stay focus on billfish, and don't get distracted in to some of the other fishing opportunies nearby.
the sails have stayed in pretty much the same area for a couple week so far, with lots of spotted dolphins balling bait and flock of seabirds chasing them and diving into bait balls. 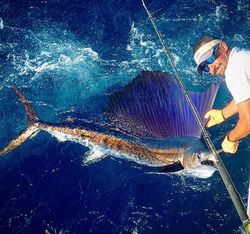 there have been an some occasional marlin getting caught in same area, but not daily for every boat.
the marlin numbers are a little off so far, for this time of year, at least in day trip range.
may & june is usually very good for marlin here and less constant for sails but it seems that everything has been running a month or so behind this year so maybe they show up soon.
for those up for a multi day overnight trip offshore. the FADS have been excellent fishing for blue marlin over past month. we have multiple options for fishing these FADS 65-200 miles offshore to experience some of the best marlin fishing in the world.

an unexpected highlight this year is the abundance of mahi mahi, locally known as dorado. they have been extremely plentiful this past 8 months. i really has been one of the best seasons i have seen for them in at least 5 or 7 years.
most years we get a peak run in oct- december but thus year they never really left and we got a big influx of small bailer mahi mahi almost everywhere over past couple months.
they are mixed in with the sailfish on the edge of corner and almost daily there is a trash line or piece of floatsam (floating debris) found somewhere loaded with bailer mahis (2-15 pounds) proving plenty of opportunity for light impact action and bags of meat to take home. 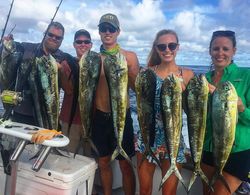 a few larger ones ones still around as well 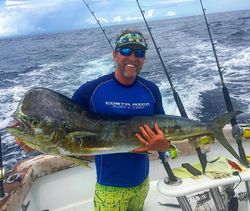 Yellowfin tuna still remain very consistent further out, its just a matter of finding the spinner dolphins they travel with, but most day the majority of fleet seems content to stay around the corner and load up on sailfish and mahis.

it is a little easier to find the spinner dolphins and tunas with a few boats looking to cover some area i the search, but is also a tradeoff as it better to fish on them without too many boats driving over them.
but for those that do venture out in each of some tunas , they are often rewarded with plenty of meat for steaks and sushi 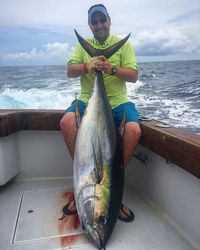 live bait like small bonitos,is often the best trick for larger tunas. but we have recently discovered large schoolsof cigar minnows out on the corner where the sails have been. which are easy to catch and much easier to keep alive and take to the schools of tuna and work very well.

the inshore fishing has been very good as well. lots of bait (blue runners) around in herredurra bay where los suenos marina sits. the most blue runners i have seen in years as well. make the insure fishing allot easier with easy to catch bait ,and predator fish nearby.

rooster fish and jacks have been very plentifull on the rocky points at either side of herredura bay, or on far side of jaco.
and lots of days the mahi mahis can be found a few miles out from there on a current edge or trash line.

a little further out in the 200-500 ft range has been very good for meat fishing for various types of snapper, grouper, rosefish, and some other edible species 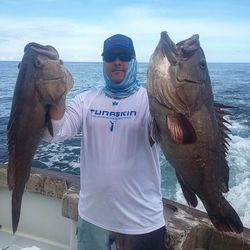 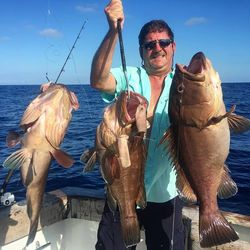 may - october is considered the "low season" or "green season" because it does get rain unlike the extremely dry high season jan- april.
but we have only got in rain while a few short times over past 2 months. most days start sunny and get progressively cloudier as days goes on and most clouds build up over land, leading to a couple hours of rain in the evening and a nice sunny morning the next day.
the days that do start off ugly usually turn into a beautiful afternoon.
it actually nice to have some cloud cover and slightly cooler temps. and is you are visiting here there is way less crowd and better deals on lodging this time of year.