April 14-19 2018, we took a trip to quepos to do a couple days of pratice fishing and to participate once again in the 2018 Offshore World Championship.
taking home our 2nd "1st place top captain crew & boat” in 6 years of fishing the Offshore world championship also took home 2 daily 1st places.
EPIC is the smallest boat to ever win, and only boat to ever win twice.

the Offshore World Championship has been held in marian pez vela, Quepos every year since 2013, since it move here from Cabo San Lucas mexico
it is a unique tournament that brings qualifying fishing teams from all over the globe to try their hand at Costa Rican circle hook sportfishing under IGFA rules trolling dead bait with circle hooks using 30 and 50 pound line for a 4 day tournament.

it is primarily a billfish catch and release tournament for sailfish and marlin, but points are also rewarded for meat fish such as yellowfin tuna, mahi mahi (dorado) and wahoo that get caught while trolling.
sailfish are scored 200 points for release and marlins at 500. teams are eligible to weigh 2 meat fish per day, with a 25 pound per fish minimum, to earn a point for pound.

teams must verify their releases on video, which get review everyday by the torment judges. videos must show anglers fishing fish. leader coming on rodtip mate touching leader, clear fish ID, and loose leader and fish swims away, all in one uninterrupted video clip. if any part is missing or not clearly seen by the judges the fish is DQ’ed and no points are awarded for that fish.

whichever angling team ever team scores the most points over 4 days of fishing takes the win and offshore world champion title and associated prizes.
Boats are also scored but the title of top captian/ top boat is taken from best 3 of 4 days, as there are few extra boats that do not wind up fishing all 4 days

not all sanctioned qualifing tournaments are billfish or circle hook fishing. Some teams are proficient and familiar with his type or fishing. especially some of the returning champion teams or teams that have similar fishery and pratice fishing with similar techniques, but many teams may be very unfamiliar with trolling for billfish at all or the techniques of using dead bait and circle hooks for them.

the key to success for a boat is not only being able to get enough bites but also. being able to work with and quickly teach and instruct whichever team is assigned for your boat how to pay attention to the spread and see fish, get to the rod, control the bite and drop back baits and successfully hook them on their own using circle hooks. mates are NOT allowed to hook fish and pass rod or touch rod during fight, and whoever hooks fish must catch fish as per IGFA rules, and make sure it all gets properly document by the teams video. i think one reason we are consistently success in the OWC on the EPIC is we make it a regular routine to try our best involve our guests in the fishing, not just the reeling in. communication and instruction of guests wanting to participate is something we take pride in, 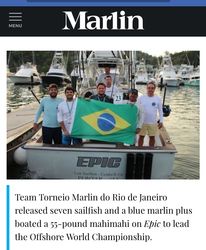 We have enjoyed a successful history on the EPIC fishing the Offshore World Championship including:

2013: 1st place Top Captain and Boat.(out of 75) the first year or the OWC in costa rica, & of business for us on the EPIC.
the lyford cay champions from the bahamas angler team that won first place" Offshore world champions" title also practiced fished with us for 3 days prior to the tournament to touch up their skills and learn our techniques of Costa rican billfish trolling.

2014: 9th place boat overall (out of 70). respectable finish, even though we had 8 billfish releases disqualified form the first 2 hours of day , due to filming problem. we had caught 21 sails and 1 blue marlin day one, but only got scored for 13 sails and 1 blue marlin as the camera operator didn’t know how to use the camera they brought. pretty disappointing way to start the tournament.

2015: 2nd place captain and boat overall (based on top 3 days); 1st place daily day 3 .top release boat in all 4 days, we scored most releases ever in any OWC anywhere with 91 releases in 4 days, 93 actually releases with 2 fish DQ,ed day . the boat that got top boat “Tuna Bite” had 83 releases in 4 days. it came down to the top 3 of 4 days where we each had 79 actual releases in out top 3 days, with EPIC ahead on time. but due to 2 DQ’ed fish on EPIC from day 1 due to filming mistake, vrs 1 DQ’ed fish on tuna bite. tuna bite took the overall 78 to 77 sailfish releases. (no marlin caught by either boat)

we are looking forward to next years Offshore World Championship scheduled for April 28- may 2nd 2019 again in Marina Pez Vela in Quepos Costa Rica
it should be interesting as it is the latest in the year it has been scheduled yet, late april , early May is late in the tail end of sailfish season and fishing can be unpredictable.


be sure to check us out on Facebook and instagram to keep up to date with recent fishing reports and photos.
thanks!
Captain Michael “MJ” Alligood
EPIC Sportfishing Costa RIca 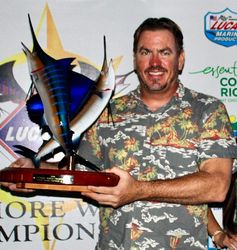 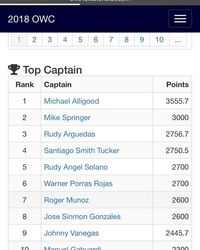 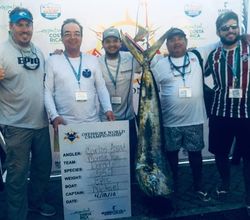