The fishing finally turned around and showed much improvement by mid-December; as it had been a slow spotty start to our season through November. Our water temperature warmed up a little from the unusual cold water for here (about 80-82 degrees) we experience through November - supposedly do to the "la Nina" phenomenon, a cold water push, the opposite of the "El Nino" hot water we had through 2015 and 2016.

Last year everyone complained the water was too hot (above 96) whenever the bite was slow, this year everyone was blaming it on being too cold when the struggled to get a bite.

Sailfish numbers began to improve a bit but still below average for this time of year, just getting 4-10 sailfish bites a day.

The real excitement was the amount of marlin that finally showed up in the second half of December. Blue and striped marlin usually have a good run between August and December. We had a few days of great marlin fishing in mid-November, but it quickly fizzled out just as quickly as it began. But they re-appeared in very good numbers mid-December and have stayed in good numbers through mid-January.

We were getting 1-5 marlin shots per day, almost every day, for several weeks. We caught lots of marlin including a few grand slams (catching 3 different species of billfish in one day) over past month of fishing, with our best day being a triple grand slam Dec. 30 - releasing 3 blue marlin, 3 striped marlin & 3 sailfish, plus a bonus 50 pound wahoo, and a couple tripletail (which is one of my favorite to eat). 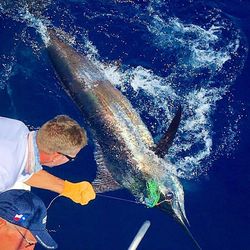 The Mahi-Mahi/Dorado which usually are here in peak numbers in October and November, also made a late appearance in December. They showed in surprisingly good numbers after a dismal showing last season. It's very common to see 2-6 mahi per day, which always makes clients happy to take home some good eats. I would expect the mahi numbers to taper off over next month or so but still should be occasional catches in the same area you catch billfish. 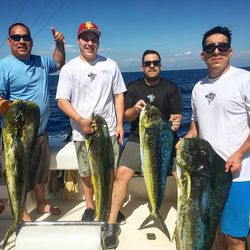 The Yellowfin tuna have also still been very common catches, probably 3 out of every 5 trips we manage to find and catch a few. Some days are easier than others depending on what they are eating. As long as they are not feeding on the small red glass minnow here, they are usually cooperative, and smaller 20-40 pound schoolies readily eat small natural colored cedar plugs or the "bullets" (a small lure made from a 30/6 shell). Having clients stand in back corner of cockpit and rhythmically jig the small lures as we slowly troll around the edge of the pod of spinner dolphins, is often very productive to catch the smaller ones.

The bigger ones will more likely be caught on live bait, with small 1 to 3 pound skipjack being the best bait to trick large tunas into feeding. The problem is the skipjack (bonitos) are delicate and can't be kept in a pen or livewell. They need to be caught that day and kept in specialized "Tuna Tubes" which flow high volumes of seawater to the skippies so they survive. And still, they usually only last a few hours at best, and we are limited to only having capacity to carry a few per boat, provided you have the opportunity to find and catch some on the way out or while fishing offshore, and then are fortunate enough to find the tunas.

Smaller live bait like blue runners and goggle eyes will also work on occasion. They are much easier to pen and keep alive for weeks, but for some reason the tunas will often be picky and turn them down lately, which I don't quite understand because a few years ago, it was all we used and if you had 10 blue runners you would get 10 bites from good sized 60-100lb fish. But they don't eat the smaller baits so consistently anymore, but I still like to carry a few everyday just for backup and it has paid off a few times this month. 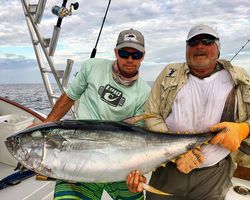 On a side note there have been a few decent sized wahoo caught offshore over past few weeks. Wahoo offshore here are not very common and being toothy fish, they usually bite through the mono or fluorocarbon leaders we use for billfish, mahi and tuna. You need to be extremely lucky for the circle hook to set in a spot where the leader does not touch the wahoo's teeth or it easy cut offs. Some people use wire leaders if targeting wahoo, but wire is not good for billfish, but still, there have been some nice ones landed by the luckier anglers anywhere from 40 -80 pounds.

Inshore - Rooster fish have been scarce over past month. There have been a few cubera snappers and amberjacks getting caught on live bait at the reef.

The sailfish numbers are bound to increase. We should be getting 20-30 bites a day by now but everything has been late this season. They will very likely move in soon. We are seeing perfect conditions for them offshore - lots of life, porpoises and birds working. Marking lots of bait and even marking sailfish on the fish finder, they just don't seem to be feeding aggressively yet. They can't hold their breath forever and are going to get real hungry soon. With the first leg of the Los Suenos Triple Crown Tournament starting Jan. 23, I have a feeling by the end of the tournament some of the 50+ boats competing are bound to find the hungry sails somewhere and they rest of the fleet will move in. The bite should continue to pick up from here through April.

Marlin numbers usually taper off a bit and bounce around after December, but with the cooler water and plenty of tunas around, I think this season will be above average for blue and striped marlin, with black marlin also being able to be targeted inshore on reef and rock piles.

Tuna - I expect the tuna to continue to be a common catches as they were last season. It seems the limits on big commercial boats fishing tuna with purse sien nets is making a positive difference and they have become a year round quarry.

Inshore - February and March are usually our best and easiest time for inshore here. So, I expect great improvement over next months for rooster fish, amberjack and cubera snapper, and I'm always up for pulling a few live skipjacks around on top for a chance at a black marlin - the pinnacle catch inshore or offshore here.

If you have any questions regarding planning your trip please feel free to give me a call or drop me an email. I fish pretty much every day this time of year from 7 am until 5 pm, Costa Rica time, so I might not be able to answer if you call in the day, but please leave voicemail and I will call you back.