Welcome to the December 2017 fishing report and forecast for 2018 for Los Suenos and Jaco Costa Rica.

We have been having a great mix of offshore fishing opportunities. The past couple months have been a banner season for mahi-mahi, locally know as dorado. Since early November, it has been the best dorado season we have had in at least 3 years.

Good "gaffer" sized (15-40 lb.) mahi have been common all over the place. Nearshore and further offshore in the open waters of the Pacific Ocean, we have been seeing 4 to 10 of these just trolling open water pretty much daily over past 2 months.

Up until about mid-to-late December, many days there would be some floating debris (flotsam) or free floating platform FAD around out fishing areas, that would have all the dorado you could wish to catch, hanging around and aggressively eating.

Later in December, there has been less and less flotsam in the area, but good sized mahis have remained quite common and plentiful while trolling for billfish. Expect their numbers to begin to decline through January as we move into sailfish season and the water warms up, until the annual migration begins again around August/September of 2018. Hopefully, they will stick around longer because it's great to have them. Everybody is happy when they have a box of mahi. 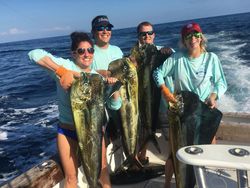 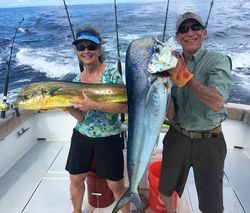 The abundance of dorados around also bring in good numbers of fish that eat them. Blue marlin have been very common offshore since late November. We typically get a good run of blue and striped marlin sometime around November/ December and so far this season has not disappointed. We are seeing between 1 and 4 marlin per day. Sometimes even 5 on a good day and a couple rare days we didn't see one.

Blue Marlin have been most common with most fish in the 125-250 lb. range with some bigger and very few smaller. Great fish to fish on light tackle, like 30 lb. standup. These fish are mostly caught trolling bait and switch as there has not been much flotsam to target them around with live bait. 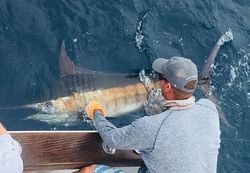 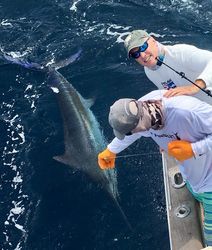 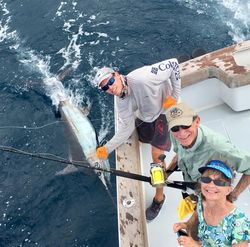 Striped marlin are also usually very common this time of year, but so far I think their numbers are below average. There have been few around but I think the major migration is behind schedule. Stripes are smaller than blues typically averaging 80-150 pounds and can get over 200 here. They are very acrobatic and the prettiest of marlin when you get to see their colors "lit up" close-up.

Last year, we were plagued with tons of tiny juvenile stripeys that were in the 10-40 pound range. They were difficult to hook because they were so small. We are not seeing any of those yet, so I expect we have yet to see the main push. Last year, they were common from mid-December until early February. 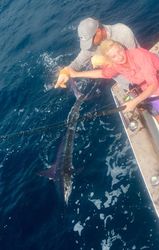 Black Marlin have been very possible over the past month. These spectacular beasts are on the ultimate bucket list of any saltwater angler. These are typically the rarest marlin here and most places. It often has the biggest average size here usually in the 350-500 pound range, and often bigger and known for big jumps close to the boat. These are best targeted live baiting around inshore reefs using live skipjack or small yellowfin tunas as bait; but there have been a few getting caught trolling offshore.

Over the past month it has been very possible to get 1 to 3 bites per day, if you put your time in live baiting. It is a game of patience and best focused on by small groups of just 1 or 2 people looking to complete their bucket list and catch and release one of these elusive and coveted fish It can be long intervals between bites and not too much other bites since the baits are usually too big for anything else - although you may get a very hungry sailfish for dorado try to eat one of the baits. Sometimes, you can get lucky and make a stop for a couple hours before heading further offshore, and get bait and a bite. We have opportunities to catch blacks almost year round, it depends a lot on what water pushes inshore and how the bait situation is.

Yellowfin Tuna have remained consistent almost year round for past couple years and continues to do so. Most every day we have pods of spinner dolphins with yellowfin tunas holding around them if that is your target, about 70% of the days through December there have been tunas to target. To find them often takes time trolling around covering goring (which you likely will get a few billfish and hi bites right now) watch radar and horizon for birds and porpoises, and listening to the VHF radio is anyone else finds them and starts catch them. Then it is just a matter of getting up and running to where they are.

We fish differently for tunas here than how we do for billfish or dorado. Live bait works great for larger tunas, if you can get it. Trolling and jig technique using rubber squids, rubber flying fish, cedar plugs and bullet lures works great for tunas in the 20-60 pound range. It is always worth keeping an islander lure with ballyhoo on the shotgun while you drive around them. They are often hungry and easy to catch any of these ways. Success is mostly a matter of willingness to getting up and run to wherever they are. Expect the tunas to remain very consistent year round, if you are not afraid to cover some ground.

Inshore, there have been fish to catch inshore, but I have mostly been going offshore due the great variety and plentiful catches offshore right now. The tuna and mahi offshore have been great for meat fisherman or even just clients looking for a meal. There have even been mahis inshore which can quickly fill coolers. There also have been some big alma jack and snappers around reef areas, as well as a few roosters in shallower reef areas and along the beaches.

As we move into January and February high season, expect some great fishing around the 26 reef and lots of rooster fish in all areas - from small 5-20 pounds on the beach, to good opportunities for trophy 50-80 pound beasts that I like to target around Isla Negritos. February is a great month for the big ones.

Deep dropping for grouper and snapper, in 200-500 ft., which I usually do allot of, has been on the back burner past couple months since there has been so much meat available offshore. But the few times we have gone we caught lots of yellow cheek and olive groupers in the 250-350 ft. range. Not real big but great eating and plentiful.

I have been keeping my eye on my bottom machine all the days I spend trolling around the dropoff, and have saved lots of new spots I can't wait to try.

Until next time, Tight lines!